If you want to achieve flavorful and tender meat, low and slow cooking is the way to go. And if you’re using a charcoal grill or smoker, things can get trickier.

The secret to smoking using charcoal lies in how you arrange your charcoal briquettes.

There are different ways to do this, but one of the most popular ones is the minion method. It’s a charcoal method for indirect cooking, allowing you to cook meat in low, stable temperatures for long hours.

In this article, we will share with you everything you need to know about the minion method.

So, if you’re interested in trying out this method yourself, read on…

Why the Minion Method is Great for Low and Slow Cooking

The minion method is very easy to do and takes only around 15-30 minutes to prepare. It’s a type of set-and-forget method as it keeps the temperature at a stable 225 °F to 250 °F range for up to 18 hours.

Basically, it gives you the same results as if you’re using an electric smoker.

The only difference is that a charcoal smoker or grill is less expensive, and you can also save a lot because you’re going to use a small amount of charcoal that will last for long hours.

The Concept behind the “Minion Method”

When we say minions, the first thing that probably pops up in your mind is the cute cartoon of little yellow creatures (called minions) wearing jumpers.

Well, the minion method didn’t originate there. It was actually invented by Jim Minion, a barbecue competitor in the US.

The concept behind this is pretty simple: You need to fill up the charcoal chamber of unlit briquettes and place a couple of lit briquettes on top of them. The lit briquettes will then gradually light up the unlit ones, slowly by maintaining a stable temperature.

It’s a very smart move because you’re starting in a very low temperature by lighting up only a few briquettes. Compare this to when you start lighting up everything, the temperature would be so high, and you’ll have a harder time bringing that down.

The minion method is pretty easy to do. You would only need a few things:

Once you’ve got that prepared, it’s time to prepare your charcoal using the minion method. 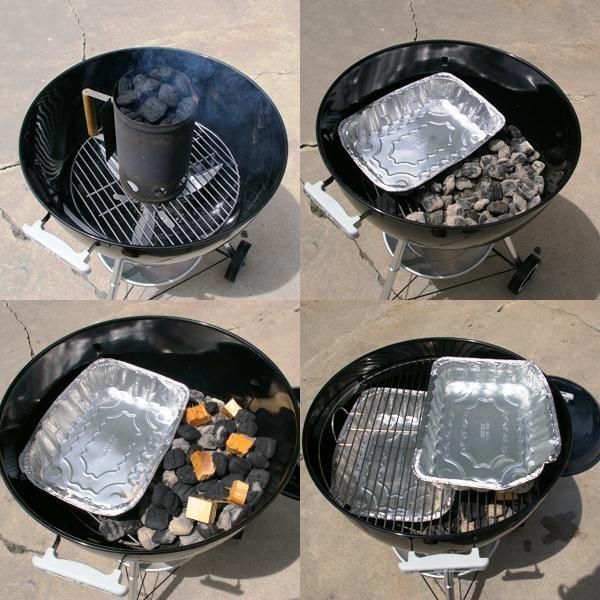 On the other hand, Briquettes are uniform in size, which means they’ll burn evenly, too. It’s perfect for the gradual lighting up of the briquettes.

So, fill up your smoker’s chamber with charcoal up to the top of the unit.

Now that you have your unlit briquettes, it’s time to prepare your lit ones.

Grab your charcoal chimney or chimney starter and place around 20-60 briquettes, depending on the weather conditions. Most experts recommend lighting up 20 on warm days, 20-40 on cold or rainy days, and around 40-60 during extreme weather conditions.

Light up your chimney starter and wait for the top coals to turn ashy.

3. Pour the lit briquettes on top of unlit ones.

Once the charcoals are ready, pour them on top of the unlit briquettes. Spread them evenly, and you’re almost done!

4. Place your smoke wood on top.

If you want some extra flavor, place your smoke wood chunks on top. Remember to add only a few, so you don’t oversmoke your meat.

Place your water pan on its designated area, usually on top of your coals. This will help prevent your meat from drying up.

6. Close the lid and wait for the temperature to rise.

Since you haven’t placed the meat yet, wait until the temperature goes around 50 °F above your desired temperature. This way, even if you open the lid and place cold meat, the temperature drop won’t affect your cooking.

Line your cooking grates with aluminum foil to protect the meat from possible direct heat. This will also save you a lot of time from cleaning after smoking.

Place your meat and insert a probe so you can monitor the meat’s temperature. Place a thermometer to monitor the internal temperature of the smoker, too. Close the lid and wait until the meat is cooked.

Throughout the smoking process, don’t open the lid frequently. Monitor the cook through the probe and make temperature adjustments using the air vents.

Monitor the amount of water on the water pan every 2-4 hours. This shouldn’t dry up.

That’s how you do the minion method. It’s easy, fast, and convenient.

Popular Variations of the Minion Method

What’s good about the minion method is that there’s not only one way to do it. There are several variations that you can try, so if you’re not comfortable with this standard minion method, you can try the following:

The first one is called the Soo’s Donut because it originated from Harry Soo. It follows the same process as the original minion method but with a few changes.

So, you start by filling up your charcoal chamber with briquettes. Then, dig a hole at the center, forming a donut. Place a few wood chunks on top, depending on how smoky you want your meat to be.

After that, light up around 20-60 briquettes using your charcoal chimney. Once that’s ready, pour that into the hole you’ve created.

With this method, you’re gradually lighting up your briquettes from the inside out instead of top to bottom. You’re also preventing the fire from burning out because of ash. And it is found to burn longer hours than the original minion method.

So, if you think 18 hours is not enough, you can use this variation instead.

The tin can method is a method modified from Soo’s donut. It’s almost the same as the latter, but this time you’re using a metal can.

You can use any type of tin can and just simply remove the top and bottom lids, creating a bottomless can.

Place the can at the center of your charcoal chamber and fill up the empty space around it with charcoal briquettes. After that, place your smoke wood on top, just enough to give your meat a good smoky flavor.

Now, grab your chimney starter and fill it up with around 20-60 charcoal briquettes. Wait until the top charcoals turn ashy to know that they’re ready. After that, pour the lit-up briquettes on the bottomless can at the center of your grill.

Once settled, grab your tongs and slowly remove the can. Now, you have a set-up that looks like the Soo’s Donut.

This method is really the same as Soo’s donut but is cleaner because of the use of the can. The fire gradually spreads from inside out and can also burn longer hours than the original minion method.

This one is like Soo’s Donut or Tin Can Method, but instead of placing your lit coals at the center, you put them on one corner instead.

So, you start as you would with the original minion method, pour your charcoal briquettes on your charcoal chamber. Fill it up, and then following Soo’s donut, dig a space or a hole on one corner.

Another variation uses the Tin Can Method, but this time, you’re placing the can on one corner then fill up the remaining space with charcoal briquettes.

Make sure that you create a space in an area near your intake vent.

Since you’re only firing up one corner, the fire burns longer using this method than the other methods above.

And that’s how you do the minion method.

The minion method is undeniably one of the most popular methods for low and slow cooking using a charcoal cooker as it already comes with several variations. But regardless of what variation you’ll use, always remember the following:

No matter how effective the minion method is, if you forget a few basics, you might end up with terrible smoked meat.

Hi! I'm Roger, a self-proclaimed grilling enthusiast. Growing up in Kentucky I spent hours behind the grill helping my father cook everything from beef brisket to lamb chops.

I am now the owner and chief editor here at Yardripe and a proud member of the National Barbecue and Grilling Association.

Get all the latest grilling guides and tips
straight to your inbox.

We promise its spam free!

Jump to a section